Another update from the jungle…

Ella returned to work after the Labor Day holiday smugly satisfied that her diabolical plan to help her co-workers was on track. As the HR manager, she had always supported management decisions no matter how cuckoo. But her loyalty to the company shriveled with the return of Frank.

Frank was brought out of retirement to fix the most troubled division of the company. He told Ella and his subordinates that he had six months to improve the bottom line. His grim expression inspired fear and loathing among his subordinates. Sure enough, within a week, Ella was processing termination paperwork so fast her laptop crashed from overuse.

Pam was fired for insubordination which was easy to believe because she argued constantly. Her last manager claimed Pam would argue about whether the sun rose in the east. Ted was fired for chronically showing up late.

Then Frank went gunning for Anna for incompetence even though her last performance review said she practically walked on water. He accused April of winking sarcastically during a staff meeting. When Ella pointed out the lack of documentation or witnesses to back up these reasons, Frank replied that HR managers can be fired for insubordination just like any other employee.

That’s when Ella conceived her fiendishly clever plan. She began meeting surreptitiously with selected employees in Frank’s division to confirm their suspicions that Frank was out to get them. She promised to help them by editing their resumes and coaching them on their interviewing skills. (She keeps up with the latest HR industry trends by attending lots of SHRM seminars.)

Before long, she was processing resignations as Frank’s subordinates bailed out for greener pastures. She asked tech for a new laptop. 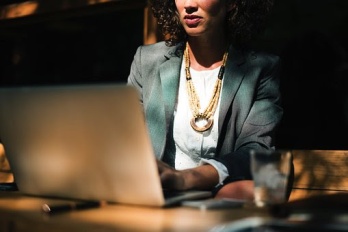 Now she’s sitting in her office editing another resume when Frank and his boss barge in to accuse her of disloyalty to the company. Ella realizes that some fink must have spilled the beans about her activities.

How should Ella respond?

1. She can reply that as the HR manager and a female over 40, she’d welcome the opportunity to talk to the EEOC about any threats to her job.

2. She can thank them for stopping by as she wants to give them her resignation so that she can open a job placement consulting business.

3. She can point out that Frank’s division will soon be the most profitable in the company as employees leave voluntarily.

In the actual situation, Ella was a supervisor who achieved 100% turnover as her subordinates moved on to other jobs where they felt more valued as employees.